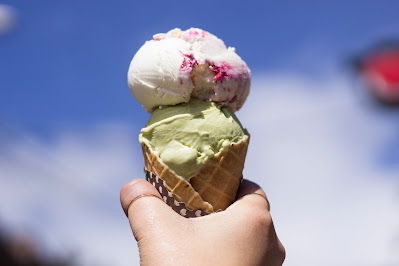 Originally published on Words Between Coasts.

I spent four years of my life working in a place that many might call a paradise, but which I called a hell-hole: an ice cream shop.

When I told people where I worked, their eyes would widen in excitement, they would squeal, and then exclaim about how I must just have the best job EVER. Because what could be bad when you work at an ice cream shop? Then, they inevitably end up coming to “visit” me to see if they could finagle some free ice cream.

Working at an ice cream shop is similar to working in a bar or as a hairdresser or any other customer service-based job.

Your objective is to have your customers leave happier than they arrived. And since I am a person cursed with a friendly face and the compulsive need to help everyone, I’d always end up with the people in want of a therapist. This often was a burden, but sometimes a blessing. There was one extraordinary interaction that I had with a customer I’ll never forget.

He walked into the shop, a dark figure swathed in the bright backlighting of the sun, looking ethereal and angelic. He took a step further into the relative darkness of the shop, and I was able to see his face; the face of a middle-aged man, gaunt, with shadows under his eyes and stubble on his chin, but none of it could dim the sparkle in his eye or his enthusiasm of a child.

I offered him samples, and he excitedly asked for quite a few, savoring every ingredient, celebrating the apparent explosion of flavors in his mouth in each spoonful. Every sensation delighted him, and with each taste his appreciation grew, even in the flavors he didn’t like. It was some of the most fun I’d ever had with any customer.

There was one thing that was distracting me, however, from which I could not tear my eyes.

Dangling on the very tip of his nose was a little ball of mucus, threatening to fall right onto the counter. Every time he moved his head, this clear drop of snot prepared to make its departure onto a surface that I would most likely have to clean. I didn’t know if I should say something or not; I had no desire to interrupt the great time he was having, nor did I want to embarrass him. Just as the situation was getting dire and I was opening my mouth to say something, I don’t know what, but something, he seemed to sense what was amiss. With the slightest bit of embarrassment, he pulled a crumpled up tissue from inside his pocket, dabbed at the tip of his nose, and said,

I’m sorry. I’m going through chemotherapy right now, and my nose dripping is one of the side effects.

I felt my heart starting to break as he put his tissue back into his pocket and, forcing himself to reignite his excitement for the ice cream, he asked for another sample.

My curiosity getting the better of me, I gently inquired further as to his situation. He told me that it was his second battle with cancer, and this time it was stage four.

Blinking back the memories of all of the friends and family that I’ve had, as do so many other people, who’ve been subjected to the aggressive beating of cancer, I scooped him his mixture of almond and honey lavender ice creams.

I brought him to the register while he apologized for giving me the details of what he was going through.

“I never tell people about my situation, so I’m surprised that I’ve told you as much as I have.”

“It happens all the time”, I told him, with a smile.

As he reached into his pocket for money, I said “this one is on me today.” He stopped and looked at me with genuine shock in his eyes. He then enveloped me in a giant bear hug, thanking me incessantly for the gift. I told him truthfully that it was the least I could do, and how grateful I was to him for confiding in me. Then he said the words that I will never forget.

“I know that I shouldn’t be happy at this time in my life, but, for some reason, I’ve never been happier. I feel so free.”

It’s what catalyzed my mission in life to not have one wasted moment, to be grateful for everything I have, both good and bad. I felt my hands starting to shake as he turned around with his cup of ice cream and exited the shop, turning his face towards the sky, towards the warmth of the sun, and all I could think to myself was that if he could be having the best time of his life during a time of severe sickness, pain, and grief, then why can’t I, a healthy woman in her 20s, be in the best time of my life?

I’ve thought about him frequently from that point on, wondering if he was ever able to recover.

About two years later, I clocked in at work, and as I walked to the lobby of the shop, a man came through the front door, once again bathed in a halo of the sun. He walked quickly, and I could see that he was wearing a “cuck fancer” shirt. I did not recognize him by his face, nor did he recognize me by mine. But, as our eyes met, we saw past each other's exteriors, I into his very being and he into mine, and I knew exactly who he was, and he knew me.

He was just as shocked that I remembered him as I was that he remembered me.

“I don’t want any ice cream today. I just wanted to come in and tell you how much it meant to me when you gave me my ice cream two years ago. It’s those little things that make all the difference, more than anything else. I’m cancer-free now, and participating in the fight against cancer.”

I told him how much his words touched my life, and how I’ve never forgotten him.

And, as he once again walked out through the doors, I was filled to bursting from this beautiful gift. Even now, years after that experience, I still make choices influenced by the lessons he taught me. Wherever he is, I hope that he is living a healthy and happy life, fighting the good fight, and changing more lives for the better.

Photo by Jean Balzan from Pexels

2022 author collab growth guest happy love new post saturday
Skylan Abraham
My name is Skylan Abraham. I'm a 23-year-old woman with an admiration for all things creative. I am mother to three boys and a fiancée to my best friend Jacob. Art has been a part of my life since I was young, and it'll never NOT be a part of me.