Ever After (a sad tale) 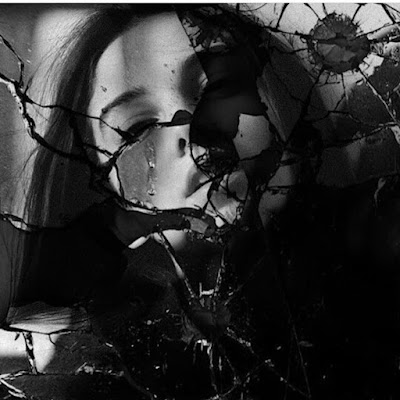 Even now, she lives broken.

She can’t shake the pained look behind her pale blue-green, sympathetic eyes. A pain which lies in malice at the forefront of her severed, tired soul. What was her plan now? A year had passed and she still did not know; could not recognize nor grasp that which she had once sought. A blatantly abysmal reality.

She stared at her reflection. A tiny statured, beautiful woman with perfect pink lips and long, straight blonde hair to fit her thin but round face and button nose. A solemn ghost of a woman stared back.

Vicariously, she asked, “why were we not good enough?”

It’s almost spring outside. Gentle dew sleeps on blades of soft grass while flower seeds begin their gentle sprout. Bees hum and birds discuss amongst the tall, sun-bound trees or glide with wings hugging the open sky. Spring; earth’s new beginning, and yet, within the dark walls of her small apartment, mother lingers on forever’s end.

Empathizing, a daughter recognizes this truth her mother often tries to hide. She was there too. Ten years had flown by. Ten years that harbored so much love and suffering, family and memories, hope and laughter. That which was shredded into pieces in mere days. Marriage, then divorce. Faithfulness meeting infidelity.

Reminded, mother’s tears gathered, her eyes darkening with sadness. It wasn't the first time he had given in to temptation, she had forgiven his first, but the most recent was his last. It was the most painful of her marriages. Time spent only to be discarded. He was supposed to be the one, yet he turned out like all the others. Unloyal. Unappreciative. Unwilling to commit to his vows. The ache deepened.

Aware of her ex-husband’s future with his newly betrothed, pregnant lover, her thoughts furmered and festered into a chaotic whirlwind of regret. How ironic it is; building with her, a forever family, a house; that which she had aspired to build herself with him? It was almost as if G-d was playing a cruel game. Her future was given to the likes of someone else, who just happened upon it but had perhaps never pictured it of herself to such an extent as she had.

She told herself he didn't really love the mistress, that he left “only because she was pregnant.” She convinced herself that they could have lived until their eighties together, until death stood at their front door. She saw herself being the one to care for him in his old age, when his spinal deterioration got the best of him and his life became bound to a wheelchair. She saw herself looking back on her life, only to see the joy her hardships ultimately paved the way to, leading to a fulfilling life alongside him. She told herself anything to ease the dread and hopelessness that engulfed her as she rewound the reality that he chose mistress over wife; his devoted.

Forgiveness. She could not forgive the mistress, yet she was willing to forgive him again, raise a child he had created with another woman. She would have done anything to keep him by her side.

Though connected to him as she was, the daughter felt him undeserving of such blind, pure love. He was immature. He shouldn’t have hid it. He should have told her mother. The daughter was angry, yet because of his important role in her life, she had met with him time and time again so as not to lose the bond they shared as daughter and step-father. Accepting. The mere truth of the matter is that “it’s been done, and cannot be undone.”

Enlightened. A child in the eyes of many; twenty is so young. How is it that she lives a life free of hatred? A small veracity eggs her consciousness when she thinks of him, “we’re simply human.” Wise above her years, blessed with an old soul. Her eyes are searchers, her heart; a seeker of truth.

The mistress has a son. He is an angelic boy. He bears wide blue eyes and a sweet semi-toothed smile. Kind-hearted and curious, knowledgeable, beautiful. A bastard child; he needed a father. As the story was written, where one family was broken, another emerged. He had stepped in to play that role of dad to a child who needed it most, who needed it more than she did. Perspective changes the heart. Be that as it may, disappointed in him and sympathetic towards mother, the daughter saw a positive light amongst the dread.

Reliving. Life is too short to hold onto the past. Looking back causes you to run ahead blind. Yet, align the future with hope, there exists a chance of a better life. With leading your days in a higher faith, there exists a brighter future. Although mother's new beginning was an unwanted, painful one, it happened in light of greater purpose. Someone's winter is someone else's spring, and eventually, she will live a content life deserving of her. Only time will tell when she will heal, but it is bound to happen, and her daughter will aid in her journey for as long as she can help it.

creative writing original short story writer
Skylan Abraham
My name is Skylan Abraham. I'm a 23-year-old woman with an admiration for all things creative. I am mother to three boys and a fiancée to my best friend Jacob. Art has been a part of my life since I was young, and it'll never NOT be a part of me.