A Pair Of Hospital Pants... 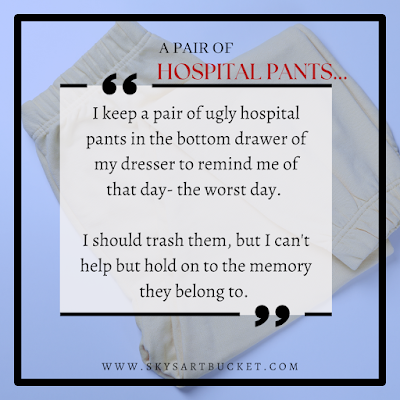 I keep a pair of ugly hospital pants in the bottom drawer of my dresser to remind me of that day- the worst day.

I should trash them, but I can't help but hold on to the memory they belong to.

I think back to that time often-

The fear, the hope, the helplessness, the heartbreak.

Losing a child is a feeling like no other- even when that child didn't resemble anything human- it was only a small pile of flesh with black eyes when it left my womb- but it was a child nonetheless.

I did have another child. A healthy beautiful boy, who grows stronger and bigger by the day, my rainbow, the third... or rather fourth of my offspring-

But those people- they don't understand the pain that still lingers- the blame I put on myself, "maybe if I didn't stress so much...maybe if I had known I was pregnant sooner."

But what hurts most is not knowing.

A lifetime of possibilities to be had- but what is now- forever unknowing.